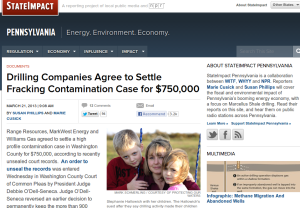 An order to unseal the records was entered Wednesday in Washington County Court of Common Pleas by President Judge Debbie O’Dell-Seneca. Judge O’Dell-Seneca reversed an earlier decision to permanently keep the more than 900 pages of court records secret. In the order she stated that the drilling company’s claims of privacy rights had no merit.

Below are the 971 pages of documents unsealed by the Washington County Court of Common Pleas on Wednesday. To view notes, click on the text highlighted in yellow.